From Abject Poverty to Relative Affluence 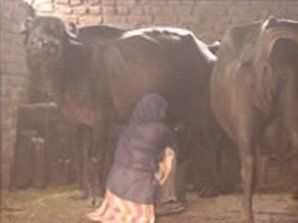 Suresho is a resident of Patna village. Her family has 9 members. Three children in the family were earlier going to school but had to drop out, as it was not possible for the family to afford the education. Suresho and her family were caught in a vicious circle of poverty. Eight years ago, the earnings of her husband were as low as Rs. 500 month. Barely able to meet their living expenses, the family found themselves at the mercy of the moneylenders every now and then. The exorbitant rates of interest charged by the moneylender squeezed all the resources they could muster up. Suresho’s family had to sell of the little land that they had, to repay the moneylender and this stripped them of the only small asset they owned. Suresho could see only darkness in front of her and there seemed to be no escape from this poverty trap.

Then one day, Suresho met one of Disha’s SHG field facilitators. She had been educating the women about the concept of SHGs and the advantages thereof. The concept seemed interesting to Suresho. Disha’s facilitator made the women aware regarding group formation, savings, coordination, and bank linkages. Thus began the Irade SHG in the village with 10 women as its members. The rest has been a tale of success. Determined to save whatever they could, the group members managed to save a substantial amount and began interloaning, which took care of their emergency needs. The group inculcated a sense of discipline by making it a rule to complete the books of the group and the accounts register, before beginning the group meeting. The group also got a cash credit limit sanctioned from the bank and availed loans but the loans were never available on time and the process was extremely cumbersome. Many trips to the bank meant losing wages for many days.

In December’2006, Suresho took a loan of Rs. 10,000 from Disha MFI. She bought a buffalo with that amount and has been able to sell milk in the nearby market. She plans to expand her sale and buy more buffalos. When asked about her activity, a beaming Suresho says that the SHG was like a guiding light in her life that led her to understand the importance of savings. Ever since she joined the SHG, she has not looked back. The moneylender is history now. Loans from Disha MFI are also like a boon, says Suresho. She could not imagine that there could be a source of borrowings from where loan could be availed in 2-3 days with minimal formalities, and the repayments would be easily explained to her. Disha MFI has provided just the same to Suresho and other women. She also says that repayment to the banks were fortnightly which was very difficult for her to manage. Here, at Disha MFI, the monthly collections give substantial time and space to clients like her. Suresho says that the installments reduce every month so repayment becomes easier. The income of the family has also increased phenomenally from a mere Rs 5,000 to Rs 75,000 per annum. Suresho is confident that it will go on increasing further. Suresho encourages the women in her village to join this movement and change their lives.