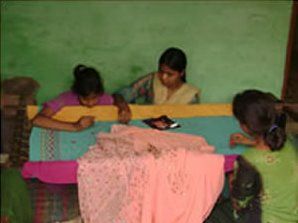 Israt lives with her husband and eight children in Chilkana village of Saharanpur district. Her husband used to engage in sale and purchase of scraps and was the only earning member in the family. The income fetched them only Rs 20,000-Rs 24,000 per annum. As is evident, the family was living in indigent circumstances and crisis most of the time. Moneylender was the only source of borrowings and borrowings also piled one on top of the other rendering Ishrat and her family vulnerable to abuse, rebuke and also violence from the moneylender. The condition of the family was going from bad to worse.

It was then that Israt came in touch with Disha’s SHG facilitators and they informed her about the SHGs that they were forming in the villages. The idea appealed to Israt and she became a part of one of the groups and the members called it Nai khoj. Israt came to know about the concept of group savings, interloaning, bank linkages and bank borrowings. Within a few years, Israt could witness a visible change in her life. There was some sort of financial backing now, which she could fall back on, in times of need.

The group was also a great moral support to her and also a platform where she could get together with other women and discuss her problems. But Israt wanted to move beyond this. She wanted to make some investment in some activity that would yield income to her on a sustainable basis. Hence she took a loan from the Disha MFI and started stitching and needlework on clothes within her house. Israt has been doing well and has bee earning enough to repay on time. She says it was so convenient to borrow from Disha MFI. She did not have to spend a lot of time on formalities and the whole process was quite simple. The field facilitators and the Headquarters staff explained the process very clearly and also the repayment schedule in a simple manner.

She has been repaying on time and plans to borrow more and expand her work. Israt also says that the provision of this loan has encouraged her to be more enterprising and she has started thinking on her future goals and how she can extend her business. She is also encouraging the other women in her vicinity to start making such investments for income generating activities.