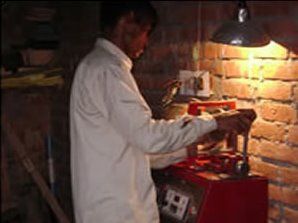 Anita is a resident of Bijopura, a remote village in Saharanpur district. Anita’s husband works on other’s agricultural land and manages to put together a meager amount for the family’s survival. Moreover, income from Agricultural activities is seasonal, which renders the family without any money in the unproductive months. In these months, the family had to scramble even for two square meals a day. They had no assets and no savings and each day of life was a struggle for them.

Anita’s husband was trained in electrical work before marriage and had worked at several places but it was not enough for survival. Moreover, the shops were far away from his village and it cost a lot to travel. After marriage, he had to work in the nearby agricultural fields, which gave him not more than Rs. 500-600 a month. Anita and family were in troubled waters.

Anita then became a member of “Khushboo SHG” which was being promoted and facilitated by Disha field workers. When savings accumulated, Anita could make small borrowings from the SHG but still she was looking for an opportunity wherein she or her husband could invest in something that will yield them income on a sustainable basis. Since Sher Singh (Anita’s Husband) was trained in electrical work like welding, making motors, repairing electrical appliances, they wanted to have an electric appliance and repairs shop of their own in the village. But the biggest obstacle was how to arrange for the finance. The SHG did have savings but from there Anita could not withdraw a big amount enough to invest in a shop. The answer to their dilemma came in the form of Disha MFI. In the group, Disha’s field facilitators informed people about Disha’s MFI programme, what kind of loans could members borrow, what was the criteria and how would it be repaid.

Anita says it is almost unbelievable that she put forth her demand in the meeting, explained to the field facilitator what she wanted to do, and that very day their group passed the resolution. Anita went to the headquarters next day and got the loan. Anita’s husband has now started the electric repairs and appliances that is doing extremely well. Since this is a remote village, people had to travel to other villages or the city to buy electrical appliances but now Sher Singh and Anita have kept a few in their shops. The villagers now call upon him if there is any electrical problem. He works very hard in his shop and many a time stays there till late night. He manages to earn Rs. 3500 – Rs. 4500 now. On some months he has even earned Rs. 10,000 per month, because the demand for electrical work is much more in the rainy season.

This has also changed Sher Singh’s attitude towards his wife. Earlier on, he was not very sure of what this whole concept of SHG meant and even though Anita used to borrow small amounts, he was not very appreciative of the fact. But now, having witnessed the opportunities it has created for them, and made Anita eligible for a loan from the Disha MFI, he wonders how they could have survived without this in life. He also feels sory for having doubted Anita’s involvement with the group and says that he will also start a men’s SHG in their village. Anita plans to borrow a loan next year and buy some livestock so that along with Sher Singh, she can also contribute to the family income with her own hard work. It is a story of tremendous change.