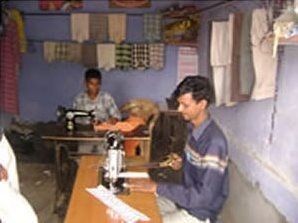 Rajender S/o Hariram is a member of Nai Raha SHG, belongs to the Dalit community.

Rajendra began going to school as a child but had to drop out of school because his family was extremely poor. He studied till 8th grade. His parents separated and whatever assets they had got divided amongst the brothers. Bad luck had it that Rajendra received 2-bighas of barren land. It did not yield anything. Not having any alternate sources of income and with a piece of land that hardly yielded anything, Rajendra and his family situation went from bad to worse. Six years ago, Rajendra came across Dishas facilitators in his village who were spreading awareness regarding Self-Help-Groups and forming such groups in the villages. Rajendra and his friends also decided that they would form a group, and hence was born the group Nai Raha.

The group members saved religiously and with the help of the facilitators, got their account opened in the banks. Disha facilitators contiuously supported and guided the group and over the years the group has a good consolidated savings and through interloaning they were able to meet many of their expenses. Recently, Rajendra borrowed a loan of Rs. 10,000 from Disha MFI and started a small tailoring shop. This initiative marked a new beginning for Rajendra. His business has started picking up and this has facilitated him to repay regularly. He is earning Rs 3,000-Rs 4,000 every month.

A vey confident Rajendra says that it was very convenient to borrow the loan from Disha MFI. There were very less legal formalities and the loan was in his hands within 4 days. The field facilitators explain the process of borrowing as well as the documentation very clearly. There is no doubt in mind while borrowing from Disha MFI. He also says that the staff at the headquarters is very cooperative. They give a repayment schedule, which makes it easy for us to know what amount we have to pay monthly. The installments also keep reducing every month hence the repayment becomes easier. This is a far cry from bowings from the bank where one just gets stuck in formalities, which extend over months sometimes. By the time one gets the loan, the utility has already passed. There is no use making that investment then. This process of borrowing from the banks chewed up all his time and energy and at the end of the day the loan is not of much use. Rajendra no longer depends on that barren piece of land for his survival. He has initiated an alternative source of income now and he will work hard to expand his shop.