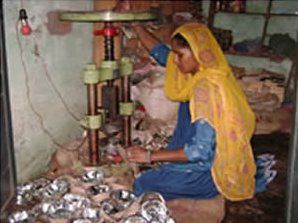 Santosh is a resident of Behat. She has a husband and 3 children in the family. Santosh falls under the BPL (Below Poverty Line) criteria of the Government but hardly ever got any benefit of being in that category except 2 Bighas of land on patta. She cultivated some wheat and some fodder for a buffalo on this land and somehow managed to make the ends meet. Her husband used to sell spices and make some very little money and they have a very small shop that was not doing very poorly.  The locality the live in is a very densely populated area with houses stacked together. They live in very unhygienic conditions. Hence the sickness rate was very high. Someone or the other was sick in the family and a majority of the income was squandered on medical bills. Santosh had to borrow from moneylender even for the treatment of ailments. Her relatives were living in the same conditions hence no one was able to lend any amount to them. The last resort was always the moneylender.

The SHG heralded a ray of hope in her life. With the help of Disha facilitators, Santosh joined “Vikas SHG” in her village with the help of Disha facilitators. In a few years the SHG had a good amount of savings and they started interloaning as well as learnt to maintain the records and registers. Santosh borrowed small amounts from the SHG and slowly started fulfilling minor needs in the house. She also financed her husband’s business with borrowings from the SHG and also started adding more material for her shop. But since there was no sustainable source of income in the family, Santosh waned to make a good investment and have some alternate source of income.

She approached the nearby bank for a loan. The manager made her run all around the place for 15 days and yet Santosh could not get the loan. After some time, Santosh came to know about Disha MFI. She and her husband decided to buy a machine for making paper plates. The machine would cost something around Rs. 6400 and would be a sustainable source of income. Santosh borrowed a loan of Rs. 10,000 from Disha MFI. Within a day the documentation was done and she had the loan in her hand. She bought one machine and this is the only machine in her village till now. The business has been doing extremely well. Santosh gets raw material from Saharanpur city and transports the finished paper plates there.

The income is steadily increasing. She is able to invest some amount in the shop also which her husband looks after. Santosh now wants to buy more machines soon and maybe employ more people and start a small business in her house. She wants to send her children to an English medium school in Saharanpur city. She can now witness her dreams coming true, slowly and gradually.